If you have a cat or if you are thinking about getting a cat, the reality is they will scratch. In fact, cats need to scratch — it's really that simple.

Cats scratch, like many other animals, to mark their territory. Obviously, scratch marks are a visual sign but beyond what your eyes can see, there are also scents that are left when the cats scratch. Unless you have a very strong sense of smell, which we humans don't have, you won't be able to smell the scent left by the cats but other animals can and do. Below the cat's paws are some superficial glands, which secrete the pheromones.

In addition to leaving a scent or marking their territory, scratching also acts like a nail file removing the dead cells from the claws. More than likely, scratching also helps to strengthen the paws and forearms. It seems to me that cats ultimately just enjoying scratching.

Cats usually scratch around important areas that mark their territory such as near windows, sleeping areas, the kitty litter, etc. As a result, it's always a good idea to put scratch pads near important areas. In fact, recently, I noticed one of my cats scratching the table where I work. I didn't realize the significance of why my cat why was scratching the table until I really thought about it — it's an important location to my cat.

The Flehmen Response is a method in which many animals, including cats, will curl their upper lip which allows the transfer of pheromones and other scents into the vomeronasal organ, also called the Jacobson's Organ. Ultimately, the vomeronasal organ is an auxiliary organ that specifically senses smells.

When an animal is using the Flehmen Response, the animal draws back their lips in a manner that makes them appear to be grimacing. The drawing back of the lip helps expose the vomeronasal organ, which then draws scent molecules back toward it. This behavior allows animals to detect scents, for example from urine, of other members of their species or clues to the presence of prey. Flehming allows the animals to determine several factors, including the presence or absence of estrus, the physiological state of the animal, and how long ago the animal passed by. This particular response is recognizable, for example, in stallions when smelling the urine of a mare in heat.

Below is an example of a Sumatra Tiger exhibiting the Flehming Response. 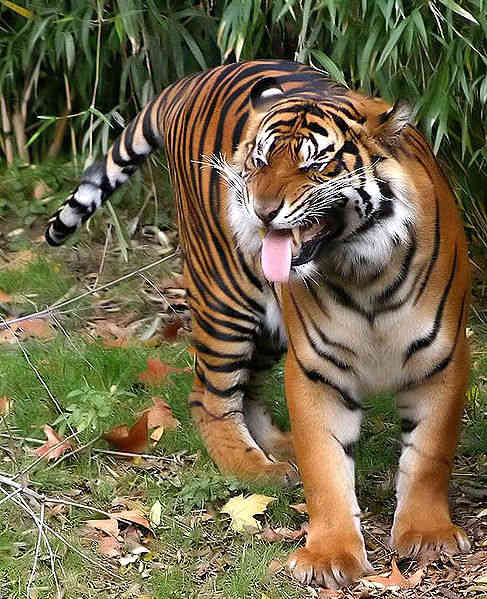 Before a cat scratches to mark its territory, a cat will usually exhibit the Flehmen Response.

Just because a cat is an outdoor cat as well as an indoor cat does not mean the cat will not want to scratch inside. Some cats, which do scratching outdoors, will not scratch indoors while others will. Therefore, regardless of whether you have an indoor or outdoor cat, it's always a good idea to have some scratch pads inside the house.

While scratch pads or scratching posts are a good idea, having cat furniture, which allows them to jump, scratch, rest and even play will also make a tremendous difference in preventing destructive scratching.

Cat toys are helpful as they help encourage your cat to exercise, scratch the toy, chase the toy, etc. This helps reduce destructive scratching as does playing with your cat. A simple piece of string is one of the best cat toys although there are many others.

Say No To Cat Declawing

If you have a cat, of course, it would be easy to declaw your cat and then you no longer need to worry about your cat destroying your furniture, etc. But the reality is, a cat needs its claw whether it be for hunting, protection, for climbing, etc. Cats need their claws. You can declaw your cat but it's not the answer.

If you accept cats into your life then you must also accept their claws.

Instead of declawing your cat, look to find a solution. Buy cat trees, cat toys, scratching pads and scratching posts.

When provided the correct tools, a cat will scratch the things they are meant to scratch and not the items you don't want them to scratch.

Learn More About Holistic Health and Nutrition For Pets

Keep reading by choosing another page or topic.