A small reddish inflamed area appeared today on his right hind leg, near the knee joint. It appears that things are getting worse before they get better — which is part of the healing process as well as being one of Hering's Law of Healing. What will happen next? How will he detoxify further? We will just have to watch and see.

While petting Jumbo today, I noticed that his skin also feels a little flaky — like old skin cells are going to fall off soon. If this happens, then it wouldn't surprise me as he has a lot of scars on his body due to extreme scratching in the past.

The inflamed reddish area on his knee seems to have disappeared today. I can still see the location that was red, but it is no longer red. Jumbo is still eating about 250 grams — such a great sign that he has a healthy appetite.

Jumbo definitely has new hair growing on his body and what's really interesting is the hair has great color, especially around the neck. The difference in color is not a minor difference either — it's quite significant.

It's been a few days since I've noticed anything significant but today, the reddish swollen area on his right knee appeared yet again. I wonder why? I don't really know why to be honest with you. But the body has a plan for healing — unfortunately, we just don't know what that plan is. All we can do is continue feeding the body what it needs to heal — a wholesome raw meat diet. For some reason also, Jumbo's appetite has really dropped significantly. He is eating almost 1/2 of what he ate originally. I try to encourage him to eat more but he's just not interested.

It's been almost 1 month since I started The Sick Pet Project. Most dogs and cats that begin eating a wholesome raw meat diet begin to detoxify around the 2–week period. Of course, this is just a general rule that I follow. I have, over the years, heard of pets detoxifying after only 3 days of eating a wholesome raw meat diet and some don't have any noticeable signs of detoxification at all. It really varies from case to case and how, when and if the pet detoxifies depends on so many factors. But generally, I find most pets detox around the 2–week period. But so far with Jumbo, nothing has really happened — until now.

It's important to note that the body is in a constant state of detoxification. Think about this for a moment — every time you or your pet exhale air, the body is detoxifying. Every time you or your pet has a bowel movement or need to relieve your bladder, you and your pets are detoxifying. Detoxification is a constant and never ending process. But saying that, the detoxification that most pets experience once they switch to a wholesome raw meat diet is different. There is a major cleansing of the body that is different to exhaling, urination or bowel movements. There is a sudden and major cleansing of the body that can happen in many different ways.

I remember when I rescued my cat off the street — she was about 4 to 5 weeks old at the time. Realizing that she had no mother or home, I adopted her and obviously began feeding her a wholesome diet. After about 2–weeks of eating a wholesome raw meat diet, my kitten began to detoxify. She had loose bowel movements — not the most pleasant of ways to detoxify as I had lots of cleaning to do, not to mention washing of sheets. However, after about 2 or 3 days, her detox finished and she went back to normal. So even a small kitten can and will potentially detoxify.

Now with Jumbo, due to his poor state of health, it's an almost certainty that he will detoxify and have a major cleanse — not a minor cleanse, but a major cleanse. Before starting The Sick Pet Project I told the owner that there is a significant, no wait, an incredibly high chance that Jumbo was going to have an extremely powerful detox and that it was going to get or would be extremely scary at times — and I sure was right about this as you will discover as you continue to read. However, I must say, even Jumbo's detox was far more powerful than I ever thought it would be or was going to be. Even I was slightly nervous with his detox even though I knew what was happening and why.

It's just the reality of a detox — it can be quite scary but after the detox is finished, it's like you have a puppy or a kitten again. This is why I always tell people that a wholesome raw meat diet will bring out the puppy in your dog and the kitten in your cat!

I don't want to give too much away as to what happens with Jumbo, so back to the present day — day 26.

Jumbo also has pimples, boils or something similar to this appearing in several locations over his body. On these pimples you can also see dried blood.

Although jumbo hasn't had a major or powerful detox yet, I am wondering if it will soon happen?

Today, Jumbo ate a good meal, more than normal. Although he has been eating of late, he seems a little pickier in what he wants to eat. So on this day, I fed him but with no supplements added to the food. I wanted to see if Jumbo would eat more aggressively with no supplements added. While he didn't dive into his food, he did eat more. So tomorrow I will add the ground eggshells and enzymes back to the food but in a smaller amount. Jumbo has been eating chicken recently and has not been as interested in beef. But tonight, with no supplements added, Jumbo wanted both chicken and beef. While I don't normally like feeding more than one meat at a time, this little food experiment told me that Jumbo still likes his beef but possibly with less supplements on it.

Two days after a detox has begun, Jumbo has more swollen areas including his knee and around the eyes especially the right eye. It's as if he has edema.

The pictures below were taken on day 28. 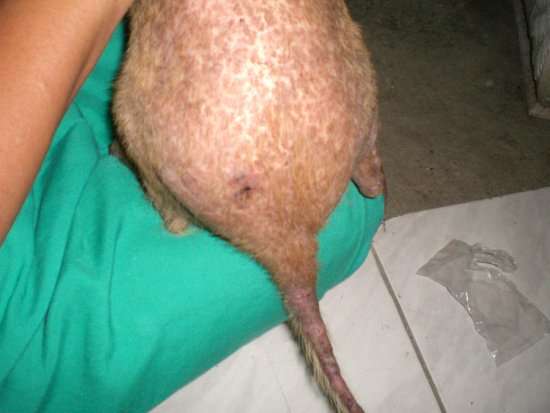 The above picture show a pimple on Jumbo's back with some dried blood. 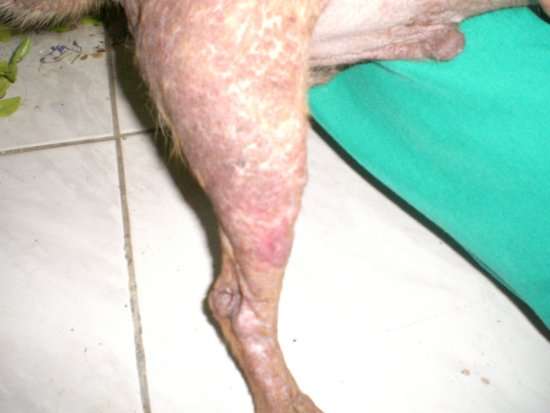 If you look closely at the above picture then you will see the reddish swollen area around Jumbo's knee.