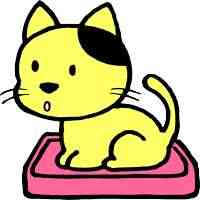 This word originated in about 1638 and originally this word was and still is used to describe taffeta from the French word tabis. Tabby is now used to describe the domestic cat with stripes and mottled coat, especially female cats.

Similar to the striped tabby, except with silver hair.

Similar to the striped tabby, except with reddish hair. Usually these cats have red stripes instead of the common black stripe.

Another term used to describe the red tabby.

These are cats with colored patches over their body. Blotched tabbies can come in many different colours and may have a diamond shaped patch at the base of their necks. Also, these cats may have markings on their shoulders that are wing shaped.

This describes cats that have black, cream, and orange patches in various patterns over the body.

These two words are used to describe the white spot found on the throat of many solid colour cats.

This term is used to describe white cats, usually a Persian or Domestic Shorthair, that have one blue eye and one orange or copper eye.

Some people refer to Maltese cats as blue cats. This not a breed of cat, but rather a way of describing the colour of the cats.

These cats have white bodies with black hair being found at the tips.

After learning cat terminology, it's only fair that you learn dog terminology too!

Doggonit, I'm Sexy and I Know It!

Doggonit, I'm sexy and I know it.

I may sound vain with that statement, but that's okay. You see, as I walk down the street on my daily walks, people stare at me. They stop me and say, you look so healthy, what do you eat?

The reason why I look so sexy is because my eyes sparkle. Why do they sparkle you ask? Well, eating fresh, wholesome and natural food helps my body eliminates toxins much more easily. In turn, this helps eliminate any cloudiness in my eyes.

Eating fresh homemade food will help create a sexy and yet harmonious Body Design By Katherine!