Amarak: The Spirit of the Wolf 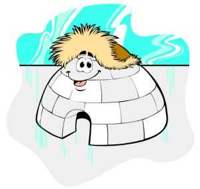 According to the text books, the wolf is a hunter, an animal of prey. The Inuit, however, take a different view.

The people of the north have their own idea of why the wolf was created. In the beginning, so the legend goes, there was a man and a woman. Nothing else on earth walked, swam, or flew. So the woman dug a big hole in the ground and started fishing in it and pulled out all the animals.

The last animal she pulled out was the caribou. She set it free to multiply. Soon the land was full of them. The people lived well and were happy, but the hunters only hunted the big and strong and soon all that was left was the weak and sick. The people began to starve.

So the woman had to make magic again. This time she called upon Amarak, the spirit of the wolf to widow out the weak and sick so the herd would once again be strong.

This short folk tale was paraphrased from the TV show called Due South which aired in the early 1990 to mid 1990's and was about a Canadian Mounty living in Chicago.

I do like to have fun and so I thought I would add a page entitled Just For Fun.

Cat like bath only when no water in bath.